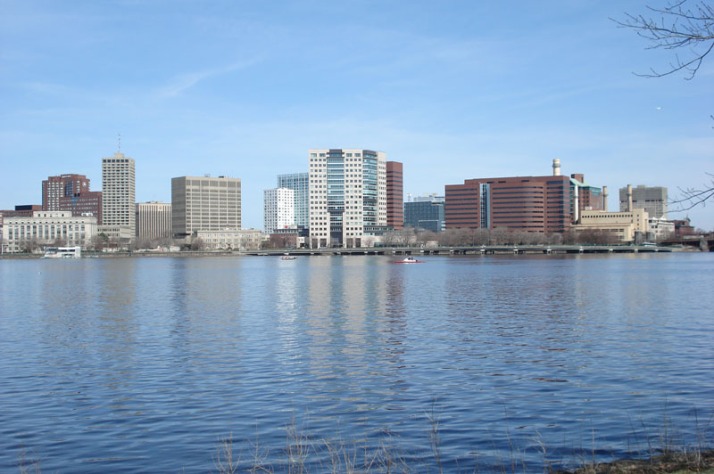 Cambridge across the Charles River

Let’s go to Cambridge, named after the University Of Cambridge in England, an important center of the Puritan theology embraced by the town’s founders who were the 700 original Puritan colonists of the Massachusetts Bay Colony, who believed in reforming the Church of England because it was corrupt. Cambridge is home to two of the world’s most prominent universities, Harvard University and the Massachusetts Institute of Technology reflecting the value placed on education. Originally the city was called ‘Newe Towne’ in 1632, it was safely up river from Boston Harbor, and had its own healing spring. It is one of the most populated cities in the state and is on the ‘other side’ of the Charles River.

To get to Cambridge I ride on the Red Line Subway; “America’s First Subway” known by locals as “The T” which “is as Boston as the Boston Tea Party”! I get off at the northern terminus of the red line called the Harvard Square stop which is also a major transfer station between subway, trackless trolley and buses. Parking is hard to come by and street traffic if often heavy so subway is faster and easier. There is a tunnel adjacent to the subway tunnel that was originally built for streetcars till 1958, now it’s used by trackless trolleys and buses serving the north and west areas. The tunnel prevents bus traffic from crossing The Square and interfering with automobiles and safer covered access between subways and buses.

I find myself in the hustle and bustle of the red brick walkways of Harvard Square, feeling the buzz of “The Square” with street entertainers, musicians and chess matches in action. Harvard Square is the historic center of Cambridge which is a large triangular area, at the intersection of Massachusetts Avenue, Brattle Street andJohn F. Kennedy Street. As the historic heart of Harvard University it is the commercial center for Harvard students, as well as residents in the surrounding areas. In an extended sense the name “Harvard Square” also refers to the entire neighborhood surrounding the intersection for several blocks in each direction. 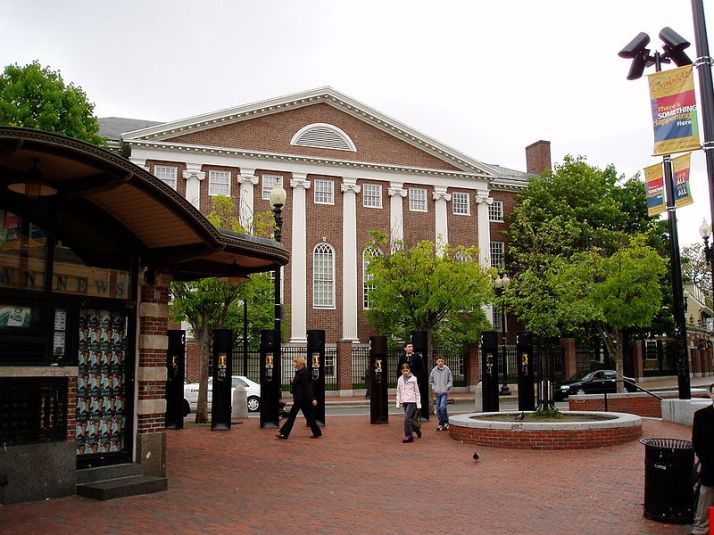 On Saturdays I love hanging out on Harvard Square to enjoy a meal, check out one of its many entertainment spots, but mostly in order to stick to my budget I peruse the quaint shops and the Harvard Bookstore. 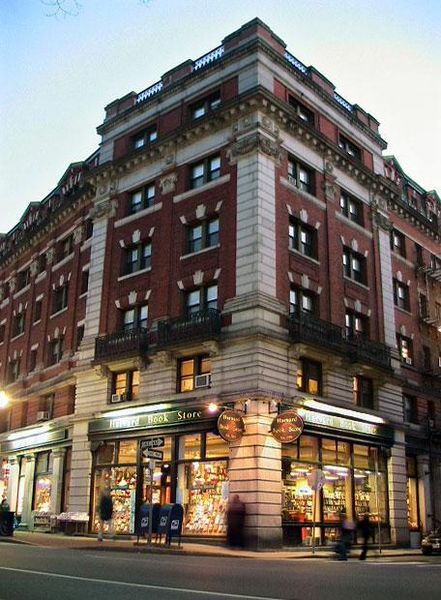 I travel north to the nearby Cambridge Common on Massachusetts Avenue, a 16 acre park with a playground, baseball field and a number of monuments. This is where George Washington gathered his troops during the Revolutionary War which now is honored by a trio of bronze cannons. There is also a Civil War Memorial with a statue of Abraham Lincoln under it and a soldier on top. I walk under all the beautiful trees covering the common going west to Garden Street. 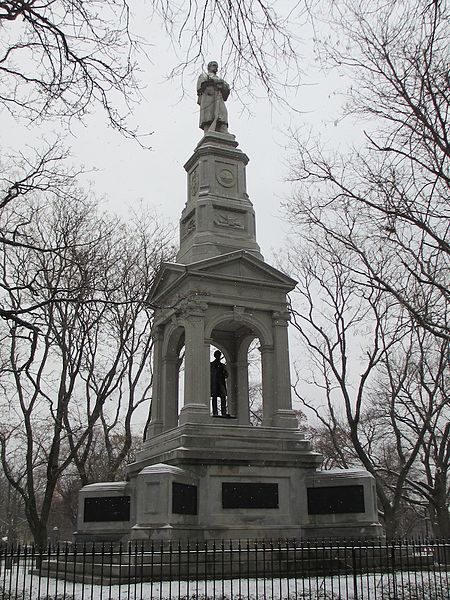 Walking south on Garden Street I come upon Radcliffe Yard and Radcliffe College awomen’s liberal arts college, and the coordinate college for Harvard University. It was founded by woman for women in 1879, since women were not allowed into Harvard. It is a part of the Seven Sister Colleges in New England that were started and supported by women. Harvard-Radcliffe diplomas began in 1963.As I stand here I am appalled that the best schools in the country are for men only and women are still 2nd class citizens.

I continue walking south on Garden Street towards the “Old Burial Place/Old Burial Ground“which is on the corner where Massachusetts Avenue crosses Garden Street. Taking a quote from the Cambridge Historical Commission:

“The first cemetery in “Newtowne” was “without the Common Pales” on the south side of Brattle Street, probably between present Ash Street and Longfellow Park. Being outside the perimeter fence, it was not safe from wild animals, and was discontinued before the West End fields were opened for settlement in 1634. No trace of this cemetery has been found.”

First I come across the Christ Church at Zero Garden Street which was constructed in 1760 establishing both the line of Garden Street and the western boundary of the colonial cemetery.

The Old Burying Ground which was established inside the pales before 1635 originally only covered about an acre but it doubled as more of the common was enclosed. It was the only cemetery in Cambridge for nearly two hundred years so it received a cross section of the people who had lived there, from the poor to the rich Harvard presidents. This is a great place to do stone rubbings on paper.

In the early years burial spaces did not have permanent headstones so it contains many more remains than the 1,218 marked graves. The slate headstones have scalloped shoulders, one is dated 1653 even though headstones were not used till the 1670s so it must have been added later. I find death’s-heads or winged skull of medieval origin which was a non-religious symbol used on the oldest headstones in the late 16th through the late 17th century. I come across winged cherubs on other headstones which show up mid 17th to early 18th century from the Renaissance period which are the most striking with interesting epitaphs and details. The third type is the willow and the urn from neoclassic period that showed up in the mid 18th and early 19th century.

The alter stones of the late 18th century wealthy Anglicans and those with social standing, I find among the traditional markers, for the upper-class families were buried in vaults. The most famous and elaborate is the John Vassal tomb which is an extensive subterranean vault containing twenty-five caskets.

I continue to head south and come across the First Parish Church, built in 1833 and known for its liberal religious thoughts. I learn that in Cambridge the churches were built after the cemetery where as in many New England towns the burying ground was placed next to the meeting house. 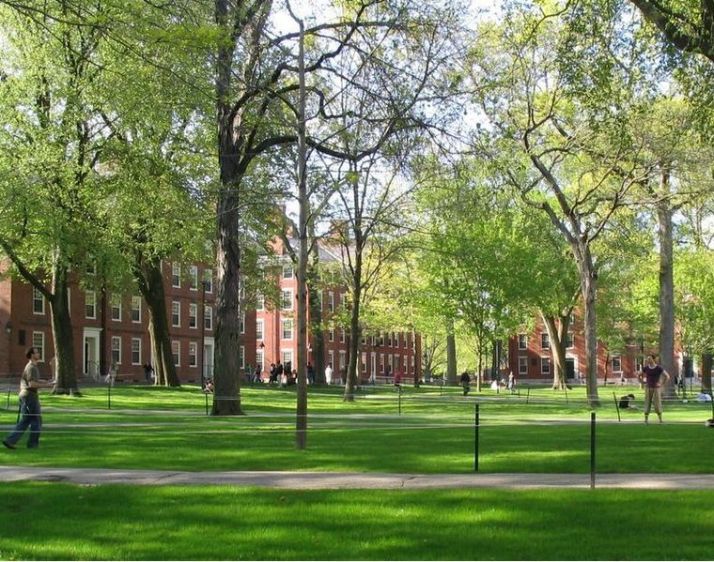 I decide to head east towards Harvard Yard which is a grassy area of about 25 acres, adjacent to The Square that is Harvard University’s center and its oldest part. On its west is Massachusetts Avenue and Peabody Street, north is Cambridge Street, northeast is Broadway, Quincy Street is east, while Harvard Street and Massachusetts Avenue is south. There are thirteen of the seventeen dormitories there in addition to four libraries, five building of classrooms and academic departments, and the central administrative offices. There are students all over the place congregating in small groups or walking to their next destination.

As I walk south I come to The Old Yard at Johnston Gate which opens onto Massachusetts Avenue where most of the freshman dormitories are; the oldest being Massachusetts Hall constructed in 1720 which makes it one of the two oldest academic buildings in the United States. To be in such an old area with so much history put my family history in perspective giving me a glimpse of the development on my country.

In the heart of Harvard Square I walk west to Brattle Street, which exudes an 18th century flavor with its seven historic Colonial mansions, where many Loyalists lived at the time of the American Revolution, so it was called the “King’s Highway” or “Tory Row“. This was an area of great conflict during the Revolution for many mansions were confiscated by George Washington’s army, later some were restored to their former owners if they proved themselves no longer supportive of the king of England. Originally it was a forest path to the Charles River. Now there are many structures from the 19th century and the more recent times, all squished together made of wood, brick, many business awnings and glass reflecting the eclectic life style of present day man.

Samuel Atkins Eliot wrote in 1912 calling the area “not only one of the most beautiful but also one of the most historic streets in America.” “As a fashionable address it is doubtful if any other residential street in this country has enjoyed such long and uninterrupted prestige.” We are talking almost 300 years!

I amble down the street and enter Longfellow’s Mansion/House at 105 Brattle Street, the home of the 19th century poet and Abolitionist Henry Wadsworth Longfellow. Inside you can see how he lived, surrounded by literature, a massive art collection, amazing photographs, letters and documents preserved as a National Historic Site. In 1775 General George Washington took command of the Continental Army and moved into the empty mansion, living in it for almost a year during the Siege of Boston. Outside there is just less than two acres, located in a built up environment, with a carriage barn and a pergola surrounded by gardens. There is so much history exuding these walls reflecting conflict and war while America was forming its beliefs about freedom.

I saunter down the street to 42 Brattle Street and admire the Brattle House which is of Georgian Architecture and built in 1725 by one of the wealthiest men in the Massachusetts Bay Colony, General-Major William Brattle. In 1774 he and his family fled to Boston when an angry mob surrounded his home. He was able to recover it in 1778 when he showed his support for America’s independence.

As I walk briskly to the subway to get home before dark my head is spinning with all that I have learned today about the making of a great country and the fight for freedom, the freedom that I take for granted. I am thinking there still needs to be more freedom granted to the people of color, those with different sexual preferences than the ‘norm’, and religious freedom, the list goes on. I even apply this concept to myself; to give myself permission to define my own beliefs and morals, rather than just accepting the ones my family instilled in me, to explore those handed and decide which to keep and which to let go of. What does true freedom look and feel like?

Thoughtful conversation about the nursing profession

My Journey of Recovery from Trauma and Dissociation

Shambhala is a real energy / frequency and we are now re-membering how to live it!

The Shift of Time and Energy!

A blog to take you deeper into understanding what is happening on earth, and how to move thru it with ease and grace!

The journey of a garden maker

until the karma heals...

Looking forward to the appearance of Comet ISON in Winter 2013 (and Comet PANSTARRS in March 2013, too!)

The Art and Science of Nurse Coaching

The Provider's Guide to Coaching Scope and Competencies

All about aromatherapy, alternative medicine & the healing arts, beauty, & the mind-body-spirit and home. Visit us on FB: https://www.facebook.com/yellowstar.aromatherapy

Love is our revolution

Connecting People to the Restorative Power of Nature

May we all...Glow With Grace!